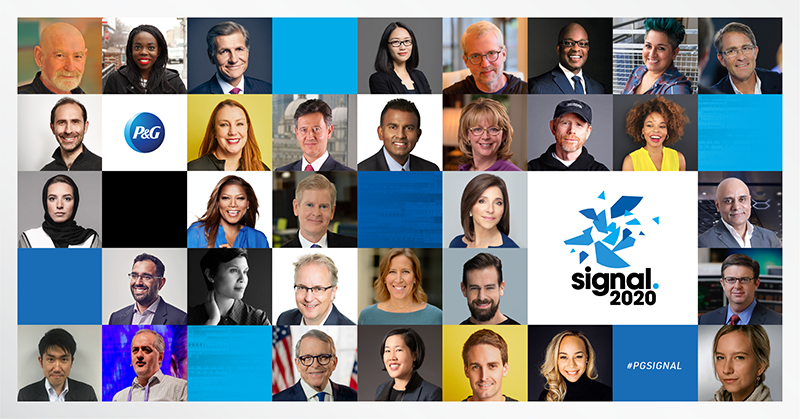 Over the course of two days and five sessions the Signal 2020 Conference #PGSignal commenced on July 15 & 16. Due to COVID-19, this year’s conference was entirely digital and open to all P&G employees, partner agencies and subscribers to Signal 360—the online technology and marketing news magazine born from previous Signal Conferences.

This was the ninth year of the conference and by far the most ambitious. The theme for Signal 2020 was Stepping Forward and was hosted by John Battelle. His first interview was with our Chief Brand Officer, Marc Pritchard. From there, Co-founder of Imagine Entertainment and Academy Award-Winning Director, Ron Howard virtually dropped by.

And that was only the start.

In the sessions that followed a diverse range of extraordinary men and women—including Jack Dorsey, CEO of Twitter, Queen Latifah, musician, actor and producer, Clover Hogan, climate activist and founder of Force of Nature, Susan Wojcicki, CEO of YouTube, and Frank Cooper III, Global CMO of BlackRock—shared their perspectives on a number of salient topics, including climate change, the future of working in a post-COVID economy, the lack of diversity behind the scenes in television and film, and how to lead during unpredictable and momentous times.

Signal also featured its first-ever Asia edition, with a range of insightful people sharing knowledge that revealed the future of sustainable packaging, how the retail shopping experience will change in China and around the world, and how social apps will evolve.

By the conclusion of Signal, viewers were suitably inspired, refreshed and ready to take action in ways that show how we can all Step Forward and be A Force for Good. More than 7,000 people virtually tuned in from 77 countries, leaving only one question yet to be answered: What will Signal do next?

Go to https://pgsignal.com to learn more about Signal 2020 and to see highlights from the Conference.

Some of our favorite quotes from Signal 2020 included:

“What has made Twitter unique and special and powerful was actually not created by the company, but the people using it every single day.”
– Jack Dorsey, Twitter CEO and CEO & Chairman, Square

“Every time I’ve gotten in a position of power, I’ve demanded that my crews reflect what the world looks like.”
– Queen Latifah, Rapper, Singer, Songwriter, Actor & Producer

“The world is only ever changed by people that have the courage to imagine it differently.”
– Clover Hogan, Climate Activist & Founder of Force of Nature

“A lot of hard decisions are being made in terms of new media and what’s the right balance between responsibility and free speech.”
– Susan Wojcicki, YouTube CEO

Take a Look Where We Are Today