P&G Science Lifts Off With NASA 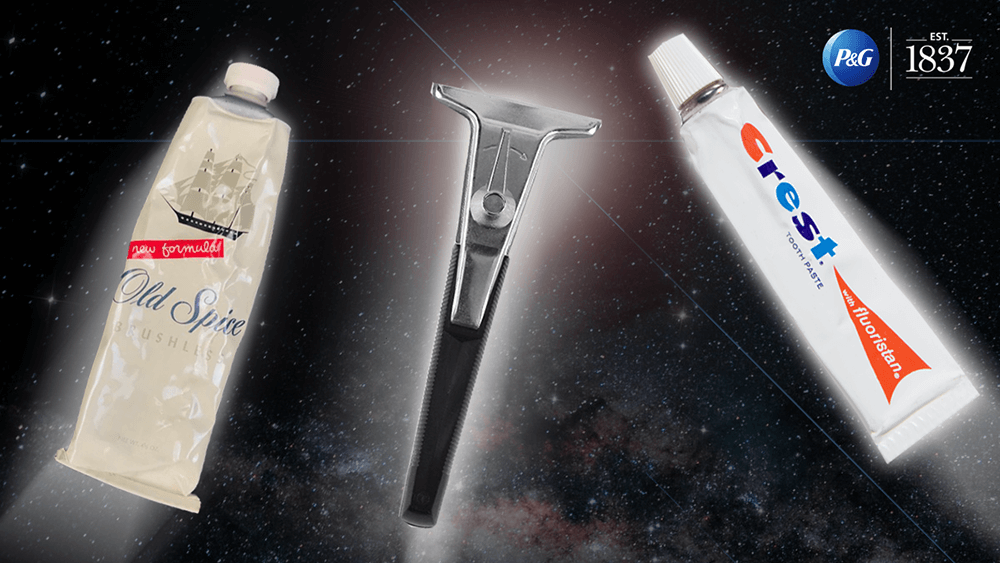 Check out how P&G and our brands are using space-age discoveries to benefit our consumers here on Planet Earth.

Procter & Gamble has supported NASA since the Apollo Program during the 1960s—and today is extending human knowledge about how our products can benefit people on Earth and off Earth.

Check out how P&G and our brands are using space-age discoveries to benefit our consumers here on Planet Earth.

One Small Step For A Man… One Giant Leap for Grooming

When man first walked on the moon, he did it with a clean shave.

During the Apollo 11 mission, all on the crew shaved with Gillette and Old Spice. Astronaut Michael Collins used both the Gillette Techmatic razor and tube of “Old Spice Brushless” shaving cream to keep a clean shave. The Smithsonian Air and Space Museum is preserving the artifacts to showcase how Collins lived and worked in the Command Module Columbia during the historic mission. Read more about it from Space.com.

In 1966 NASA asked Crest to create a formula that could be used in space (no suds and swallowable) and the attached Moonbeams story shares more details. Oral-B brushes were included in later Apollo flights as astronauts were allowed to request which brand they wanted to use. 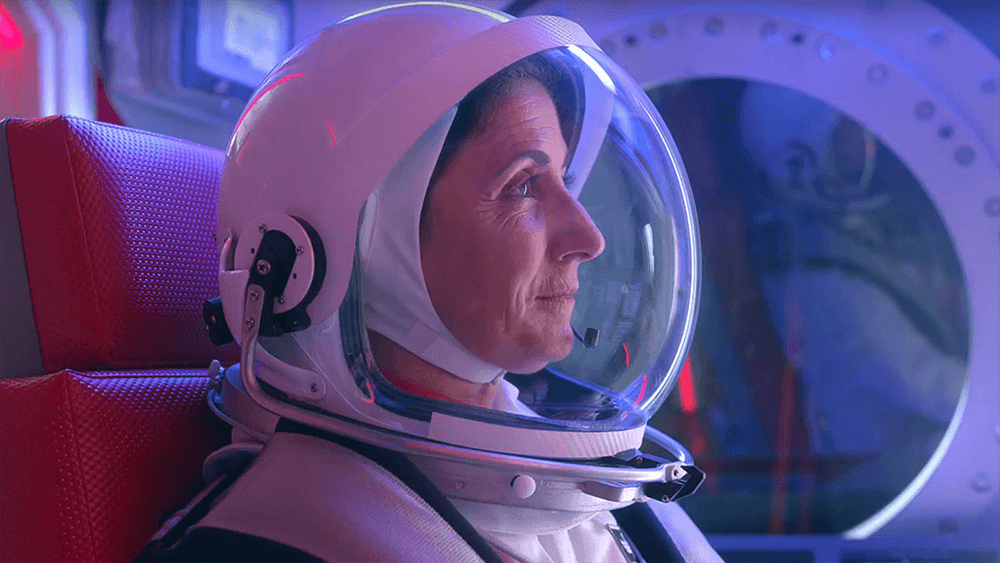 “Make Space For Women” with Olay

Retired NASA astronaut Nicole Stott lived aboard the International Space Station for 100 days—so she’s experienced with life off our planet. In 2020, she teamed up with Olay for Make Space For Women an inspiring Super Bowl Ad and down-to-Earth support to encourage more young women pursue careers in space and science. Read her interview from Space.com.

Olay has committed $1 Million to support women in STEM; learn how they are helping Face The STEM Gap. 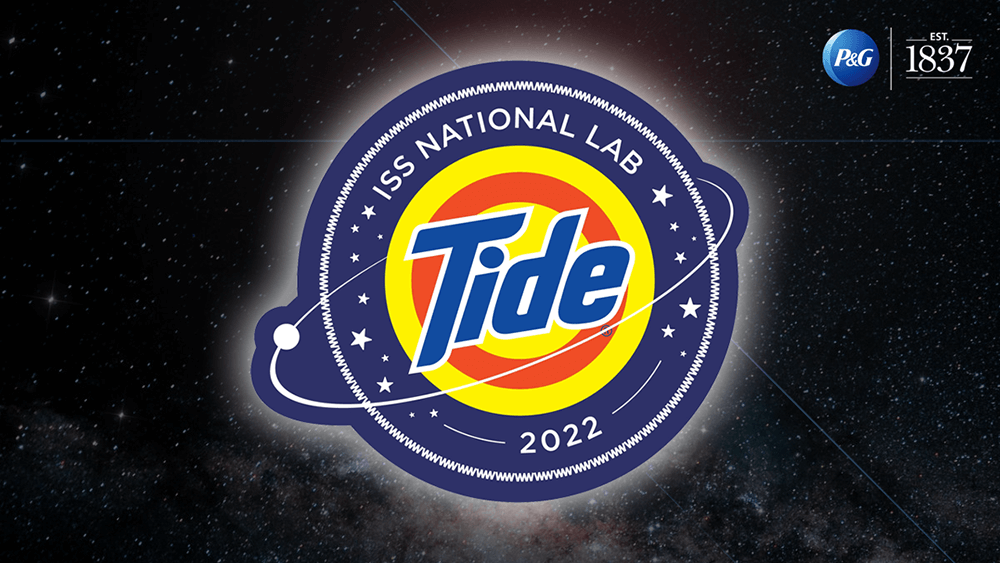 Currently, astronauts on the International Space Station wear clothing several times before replacing with a new set. Major challenges for off-Earth laundering include ingredient safety and compatibility with NASA life support systems, and the limited amount of water available per wash load and the requirement that the wash water be purified back to drinking-quality water.

To combat these challenges, Tide has developed Tide Infinity, a fully degradable detergent specifically for use in space, and PGTIDE studies the performance of its stain removal ingredients and the formulation’s stability in microgravity.

“From a scientific standpoint, the major challenges for off-planet laundering include the strict requirements for compatibility with the air purification systems, the limited amount of water available per each wash treatment, and the requirement that the laundry wash water be purified back to drinkable water,” says Mark Sivik, a research fellow at P&G. Find out what to expect when Tide ventures to space. 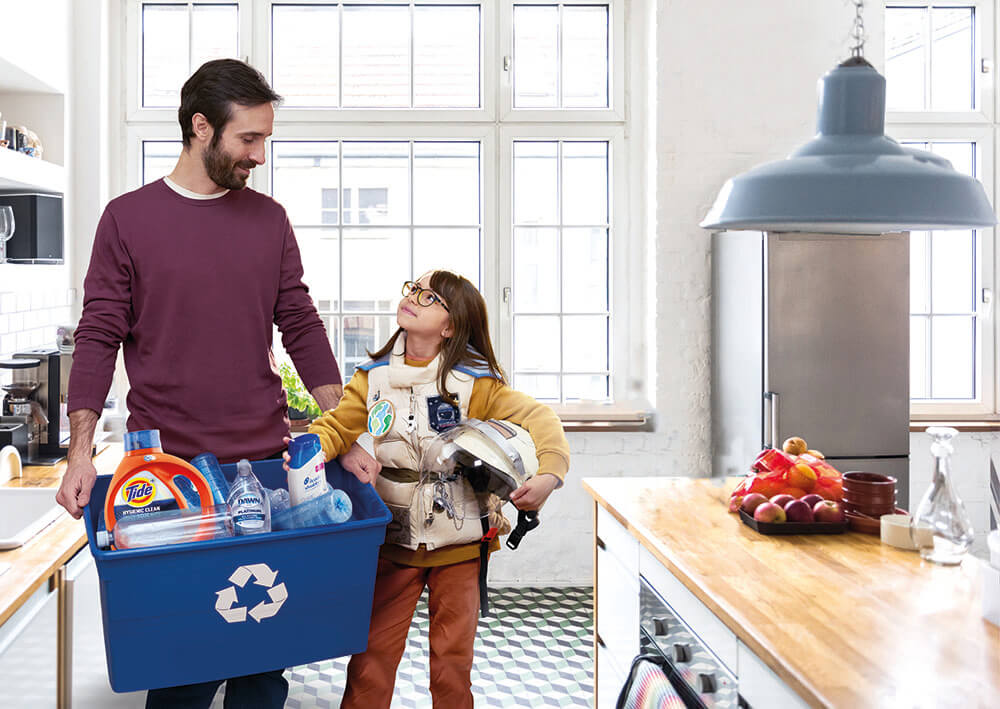 Sustainability At Home Make a Difference For Our Planet

Nearly 90 percent of parents reported that their children are most likely to influence them to be more sustainable at home. This insight inspired our new short film, It’s Our Home, in which aspiring astronaut Luisa helps her family make easy choices to protect their planet.

Learn more about It's Our Home, our campaign to highlight how small actions at home can make a world of difference for our planet

A Pathway to Patents

P&G and NASA share a common goal: bettering life on Earth by defying gravity and conducting research in space.

As a direct result of conducting its research on the International Space Station, P&G has received approval on three patent applications as of 2019. For P&G, some of the benefits of the research could lead to lowered production costs, extended shelf lives, and enhanced product quality. Read more from NASA.

Take shampoo as an example: when you’re using it, it needs to flow out of the bottle like a liquid but when in transport and on a shelf, the solution needs to behave almost like a solid.

Read how P&G is using space station science to mix up better products.

In July 2020, we announced a bold new partnership with Imagine Documentaries to produce Mars 2080—a look into the future of what life on a Mars colony could be like sixty years from now.

The partnership and this film will leverage P&G’s heritage to tell a story of the importance of supporting sustainability, equality and health, said P&G’s Chief Brand Officer Marc Pritchard.

“P&G Scientists will bring nearly two centuries of experience in science and innovation in areas such as sustainability to help shape a story of what life and home on Mars could look like in the future,” Pritchard said. “And consistent with our commitment to equality, the Mars 2080 film will be created with diverse talent in front of and behind the camera.”

Read more about this historic media partnership from Imagine Entertainment.

To see these out-of-this-world technologies like Tide, Oral-B and Gillette, join us in the PGLifeLab during CES 2022.