P&G Pakistan believes in giving back to the communities where it operates. It’s a powerful gift to witness the impact of the Company’s products on consumers firsthand. But even more so, to provide the gift of clean water to those in the most vulnerable regions of the country.

According to the World Health Organization, 1,000 children die every day from diseases contracted by drinking contaminated water. Diarrhea is a leading cause of illness and death among infants and children in the developing world, including Pakistan. Over the last three years, P&G has partnered with METRO Cash & Carry and HOPE to provide nearly 45 million liters of clean drinking water to disaster-struck families in Pakistan, providing approximately 200,000 people with clean drinking water for 4 months. 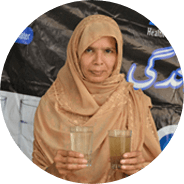 While many individuals cannot conceive of it, drought, earthquakes, and floods are recurrent perils to areas across Sindh, Punjab and KPK in Pakistan. These disasters have displaced several vulnerable families over time and this partnership has introduced sachets of hope to the families in these regions.

For many people, even in urban slum communities of Pakistan, access to clean drinking water is an ongoing struggle. Summer time brings intense heat making the need for clean water even more critical as unhygienic water compounds issues for slum dwellers, leading to dehydration, dysentery, diarrhea and other illnesses.

In April, P&G Pakistan and the HOPE team initiated a program to provide clean drinking water to slum communities in Karachi. Though in close proximity to the urban center, these communities are a world away in terms of limited access to amenities like electricity and running water. The team committed to delivering P&G Purifier of Water sachets to the people of Karachi during the hottest months, April – October, of this year. By October, the program hopes to hydrate around 7,000 people, with clean drinking water by equipping families with a 4-month supply of sachets and equipment essential for the purifying process. Families are also being educated on how to use the sachets and revisits will take place a few months after the distribution to monitor progress and improvement in health. 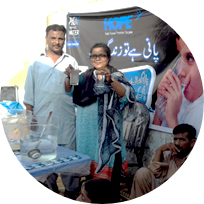 Claudia Manuel, Communications Manager, P&G Pakistan, explained how they were inspired to serve communities in Karachi, “Our commitment to give back to the communities where we live and work is deeply rooted in P&G’s purpose to touch and improve lives. Karachi, the largest metropolitan in the country, is home to several underserved communities which is why it is so important that we play our part in helping build up these communities in need. Through this program we aim to further our social responsibility mission in the country by improving health and hygiene for people who need it most.”

Among many compelling reasons to serve the communities in such a real and tangible way Claudia reflects that this humanitarian effort truly does affect us all, “It’s a very positive and powerful cycle. When we build communities up, they become contributing members of the society who eventually play their part in giving back to the community.”

This vital impact, long felt by the families who have benefitted from the aid of the P&G Children’s Safe Drinking Water (CSDW) program, since 2004, plays an impressive and critical role in the Company’s effort to fight the world water crisis.