This year marks a milestone for P&G Pride – both inside and outside P&G.
This year, we honored the 50th anniversary of the Stonewall Inn uprising in New York City, an event many recognize as the start of the journey towards LGBT+ equality, and the 25th anniversary of our employee affinity group, GABLE.

It was a year to celebrate the progress we’ve made, and reflect on what still needs to be done.

As a Company, we see World Pride 2019 as an extension of our commitment to inclusion: We See Equal. This means we strive to ensure our employees feel included and valued. As the world’s largest advertiser, we’re also on a mission to use our voice to start important conversations that drive equality.

Throughout the month of June, we used our voice to tackle bias, spark conversations and change mindsets.

We partnered with Great Big Story to launch a new film entitled Out of the Shadows, which traces our own internal journey for LGBT+ inclusion, and recognizes the courageous individuals who made a lasting impact on P&G and the communities where we live. As the sequel to last year’s award-winning film, The Words Matter, this film follows the journey of a small group of P&G employees who rallied against intolerance and hate, and turned the tide of prejudice. Their efforts helped to ensure that LGBT+ employees received equal benefits within the Company. 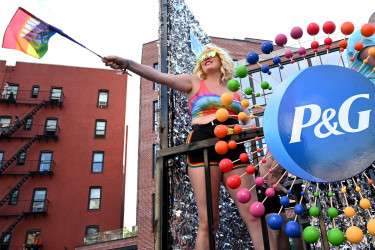 We’ve found that consumers want to know what their brands stand for, and buy products from companies that share their values.

This has given P&G a greater opportunity to share what we value as a company --- shared respect for all individuals. This has led to support for various organizations and advertising over the years that creates positive portrayals and conversations about LGBT+ inclusion and respect.

Recently, Pantene launched a new ad, Don't Hate Me Because I'm BeautifuLGBTQ, in the U.S., reflecting on the brand’s famous 1986 ad campaign and re-defining what “beautiful” looks like today.

Gillette debuted, “First Shave”, a touching ad that follows Samson, a transgender man who uses a razor to shave himself under the caring guidance of his father.

P&G in the UK launched the Fairy FAIR campaign, campaign to support young people in their journey to coming out to their families. This coincides with publishing a new FAIR report, which outlines significant progress made in the UK over 30 years.

In addition to being one of 12 founding members of the first global coalition (Human Rights Campaign) committed to fostering LGBT+ equality in the workplace throughout the world, P&G is a founding partner in Stonewall’s Global LGBT+ Diversity Champions effort. Our brands have formed partnerships with various groups including The Trevor Project, GLAAD, the Albert Kennedy Project and others to support important work in communities.

P&G has supported Pride events since 2000, and has actively participated in nearly 50 Pride celebrations on five continents this year including our Platinum sponsorship of the 2019 WorldPride March in NYC.

Five of our brands including Gilette, Herbal Essences, Metamucil, Pantene, Secret, brought their brand story to life during the parade with vibrantly decorated tricycles, adding to our sequined We See Equal float.

We also sponsored Queer City: A CNN Experience in New York, where we featured Out of the Shadows as part of the exhibit that outlined the journey of the LGBT+ experience throughout the decades.

We hope you join us on this journey. Please check out our new film, and help us celebrate by sharing our stories around the three words that summarize our commitment to inclusion and Pride, both inside and outside P&G: #WeSeeEqual.