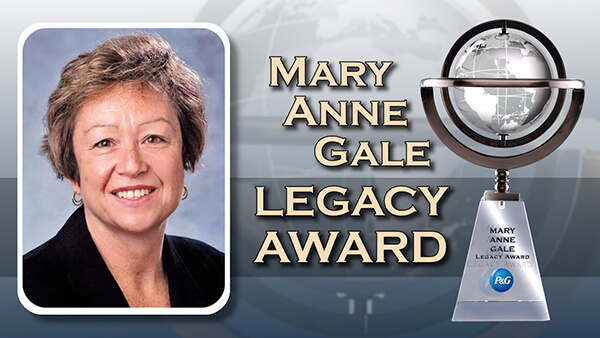 Throughout P&G’s 183-year history, there have been many firsts. Legendary trailblazer Mary Anne Gale was among them – she was the first female plant manager at our Mehoopany site in Pennsylvania, which is one of P&G's largest plants in the world, and in 1999 she was named the first woman Vice President in Manufacturing.

When Mary Anne passed away in August last year, we lost one of the most exceptional leaders in the Company’s Product Supply history. Mary Anne Gale was a driven and compassionate change agent, and consistently delivered best-in-class results throughout her career, making a noticeable and lasting impact on the business, people and communities she touched.

In honor of her memory, P&G has established the Mary Anne Gale Award to recognize the individuals achieving the highest standards among P&G's Product Supply organization, which is comprised of nearly 58,000 people employed in our Manufacturing, Quality Assurance, Innovation, Engineering, Logistics and Purchasing disciplines.

In its first year, the selection committee honored not one, but two individuals who have blazed the way for others like Mary Anne: Junko Murakami and Terence Moore.

Junko Murakami is a Product Supply employee, mentor and leader at our site in Takasaki, Japan. Murakami-san has been a role model for those who manage a dual career and have high career aspirations, which may not be the cultural norm. She has helped create programs at the sites in the support of working women and is helping drive an increase in the number of female plant technicians. She has been recognized as the Woman Business Leader in the Japan Industrial newspaper for her efforts, which are impacting women across Japan.

Terence Moore has been tireless in his efforts to pave the way for others. Terence joined P&G in 1980, becoming the first African American plant manager at Green Bay, WI, and Weston Road, Canada. Later he became the first African American Senior Vice President of Global Business Services. As Terence retires, he will leave us with a lasting legacy of his commitment to equality and inclusion.

Terence, Junko and Mary Anne all embodied our commitment to equality and inclusion at P&G. To learn more, visit https://us.pg.com/diversity-and-inclusion/.

Learn more about our Citizenship efforts